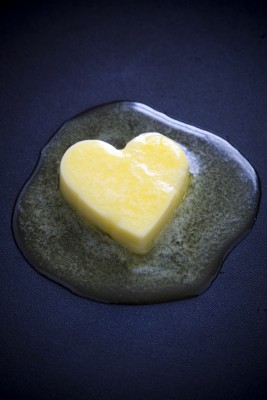 You've heard it repeatedly: there are two kinds of cholesterol: the good high density lipoprotein (HDL) and the "bad" low density lipoprotein (LDL). Now a researcher at Texas A&M University has come to the defense of LDL and says that it may not be so bad after all.  In fact, it helps build muscle.

According to Steve Riechman, a researcher in the Department of Health and Kinesiology, the study reveals that "LDL is not the evil Darth Vader of health it has been made out to be in recent years."

In a study published in the Journal of Gerontology, Riechman and colleagues from the University of Pittsburgh, Kent State University, the Johns Hopkins Weight Management Center and the Northern Ontario School of Medicine examined 52 adults from ages 60 to 69.  The participants were in generally good health, but not physically active, and none of them were participating in a training program.

To the researchers' surprise, after the subjects completed fairly vigorous workouts, the participants who had the highest levels of LDL cholesterol had gained the most muscle mass.

According to Riechman, the study shows that we need a certain amount of LDL to gain more muscle mass. "There's no doubt you need both – the LDL and the HDL -- and the truth is, it (cholesterol) is all good," said Reichman.

Cholesterol is a type of fat found in all humans and serves many necessary functions in the body.  For instance, it's been called the mother of all hormones.  Any attempt to remove all the 'bad' cholesterol from your body would cause serious problems.  In fact, low levels of cholesterol can be hazardous to your health.

LDL is almost always referred to as the "bad" cholesterol because it is often found as a buildup in the walls of arteries.  It's been associated with a slowing of blood flow which often leads to heart disease and heart attacks. HDL, usually called the "good cholesterol," often helps remove cholesterol from the arteries.

However, the idea that there are "bad" and "good" blood lipids that contribute to heart disease is known as the "lipid hypothesis," or "cholesterol myth."  The hypothesis is subject to much criticism and has been challenged often.  The underlying causes of cardiovascular disease are more likely related to inflammation and other factors.

Riechman agrees that the common attitude to cholesterol is wrong.  He prefers to focus on the very useful purpose that LDL serves.  Without cholesterol, he points out, we would die.  In fact, studies in the elderly have shown that those with the lowest levels of cholesterol are at highest risk of death from all causes.

"Everyone needs a certain amount of both LDL and HDL in their bodies," says Riechman. "We need to change this idea of LDL always being the evil thing – we all need it, and we need it to do its job."

He points out that LDL delivers needed cholesterol to our tissues for repair, and HDL, the good cholesterol, cleans up after the repair is done.  This study shows another benefit of LDL.  The more you have in your blood, the better you are able to build muscle during resistance training.

What's bad about that?